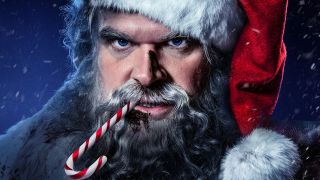 We’ll level with you: this weekend is not a particularly great one for new things to watch on streaming services. While the likes of The Last of Us, Vikings: Valhalla and The Menu got January off to a great start, the next few days are decidedly less interesting on the entertainment front.

That’s not to say there aren’t any new movies and TV shows to stream, but when our list of recommendations is topped by That ’90s Show on Netflix and Violent Night on Peacock, it’s hard to get excited about spending the weekend on the couch. Trip to the cinema, anyone?

In any case, we’ve still gone ahead and rounded up seven of the biggest additions to Netflix, Prime Video, HBO Max, and more to help you find something – anything! – to enjoy over the next few days.

Long-running Fox sitcom That ’70s Show gets a Netflix-based revival this weekend in the form of That ’90s Show.

Unlike the short-lived That ’80s Show, this sequel series is set in the same world as the original production – albeit 15 years later – and follows Eric and Donna’s daughter, Leia Foreman (Callie Haverda), as she visits her grandparents (played once again by Kurtwood Smith and Debra Jo Rupp) for a summer in Wisconsin.

Newcomers to Point Place include Ashley Aufderheide, Mace Coronel, Maxwell Acee Donovan, and Reyn Doi – but the likes of Ashton Kutcher, Topher Grace, and Mila Kunis will also be making guest appearances throughout That ’90s Show’s 10-episode first season. Can this one earn a spot on our best Netflix shows list? Unlikely, but we won’t rule it out just yet.

Now available to stream on Netflix.

If you’ve ever wanted to see Santa Claus embark on a murderous rampage (no, neither have we) then look no further than Violent Night on Peacock.

Starring Stranger Things’ David Harbour, this gleefully brutal black comedy – which debuted in theaters just before Christmas last year – pits the Big Man himself against a group of mercenaries who attack the estate of an unsuspecting family on Christmas Eve.

Unsurprisingly, reviews for Violent Night were mixed upon its release, with verdicts ranging from “amusing heist shocker” or “overly indulgent.” Still, if you’re in the mood for some festive antics in *checks notes* January, then you’ll likely find plenty to enjoy here. UK viewers can find this one still playing in theaters.

Now available to stream on Peacock.

One of the best Prime Video shows, The Legend of Vox Machina, returns to Amazon’s streamer for its highly anticipated second season this weekend.

Once again set in the fictional Dungeons & Dragons (D&D) kingdom of Tal’Dorei, new episodes of this animated fantasy series find Vox Machina tasked with saving the world from a sinister group of dragons known as the Chroma Conclave.

The first three episodes of The Legend of Vox Machina season 2 are available to stream now, with the remaining nine set to arrive in three-piece batches every Friday through February 10.

Set in a post-apocalyptic 22nd century, the film follows a researcher at an AI lab who leads the effort to end a civil war by cloning the brain of a heroic soldier – her mother. Written and directed by Train to Busan filmmaker Yeon Sang-ho, it stars Kang Soo-yeon (in her final appearance before her death), Kim Hyun-joo, and Ryu Kyung-soo.

Critics have called Jung_ E “beautifully heartrending” and a “slick and sentimental surprise,” so the film may yet earn a spot on our list of the best Netflix movies in 2023.

Now available to stream on Netflix.

Full disclosure: we’d forgotten about Truth Be Told on Apple TV Plus. Not because it doesn’t warrant remembering, but the Octavia Spencer-led series never generated quite the same buzz as Severance and Ted Lasso, both which take pride of place in our best Apple TV Plus shows list.

In any case, new episodes of the slick crime drama will find Spencer’s investigative journalist–turned–true crime podcaster, Poppy Parnell, chasing down leads to a suspected sex trafficking ring that may be responsible for the disappearances of several young girls.

The first episode of Truth Be Told season 3 is available to stream now, with the remaining nine entries scheduled to arrive every Friday through March 24.

Now available to stream on Apple TV Plus.

Sticking with the theme of bleak crime dramas, new anthology series Accused begins streaming on Fox Now in the US from Sunday.

Adapted from the 2010 BBC production of the same name, this 15-episode thriller follows various different characters as they await their verdict in court and tell the story behind how they find themselves accused. Michael Chiklis, Margo Martindale, Wendell Pierce, Rachel Bilson, and Abigail Breslin are among the show’s ensemble cast.

The first episode of Accused is available to stream now, with subsequent installments set to arrive shortly after their terrestrial debuts every Tuesday evening. There’s been no word yet on when UK viewers can stream the series, but the BBC original is still available on BritBox.

Available to stream on Fox Now from Sunday.

In truth, this week’s documentary selection is pretty lackluster – so we’ve decided to show HBO Max some love by recommending the second season of Game Theory With Bomani Jones.

This popular chat show finds journalist Bomani Jones breaking down timely issues in the world of sports through in-depth analysis, interviews with special guests, and his signature commentary style. New episodes will become available to stream every Friday.