Before entering Bollywood, Amitabh Bachchan used to work in radio stations and maintained other jobs in Calcutta (now Kolkata). However, after stepping foot into the Hindi film industry, Big B changed the kismat of Bollywood. He is the Shahenshah whom everybody adores and obeys. A while back, Amitabh took to his blog and took a trip down memory lane reminiscing the early days of his career. Scroll below to read more about it.

Amitabh has struggled a lot to make a name for himself in Bollywood with his hard work, dedication and acting skills. He has started a legacy that his family still follows.

A while back, among his millions of fans, one of them took to their Twitter handle and shared that Amitabh Bachchan used to work in Blacker’s Company and earn Rs 1640 in his initial struggling days in Calcutta. The tweet can be read as, “The last day of @SrBachchan’s job in Blacker’s company in Kolkata was 30th Nov 1968. Salary 1640 Rs. File is still preserved there till date”. Sharing the tweet in his blog, Big B mentioned how overwhelmed he is and wrote that he is feeling “extraordinary…to be maintaining such a file after so many years and after an insignificant tenure at Blacker’s.” 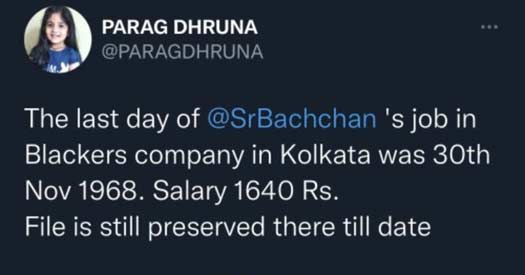 As reported in DNA, further in the blog, Amitabh Bachchan shared, “Those days in Calcutta, now Kolkata .. free ..freedom .. freeeessstttt .. just the most independent times ever… 8 of us in a 10′ by 10′ room .. those were the days my friend .. office hours, then evening with the guys checking out the joints of popularity .. no money to enter them, but standing around with the hope that someday we shall. And we did…pooling in…buttering up the gatekeepers… telling them when time improves shall look after them… haha never happened.”

Explaining how in the process of becoming successful in his profession, he lost so many friends. Emphasizing it, he wrote, “When in new profess .. and the shoot in city .. visiting same places , now getting invited to them .. and the change .. meeting those ol’ times and people and giving them the desired promise of yore .. visiting all the ol’ streets of residence in the middle of the night .. and recollecting each and every spot and what transpired there .. some unpleasant but generally all in the goodness of events .. some friends lost .. some of those times still around .. nostalgia .. and the love of them that remained till the last with us…NOW .. new fresh friends and Ef .. steady loving filled with emotion and great respect and care…”

Did you know about Amitabh Bachchan’s salary from his earlier days? Let us know!

Must Read: Malaika Arora & Arjun Kapoor To Be Parents Soon, Expecting Their First Child Together? Here’s What’s Been Reported!