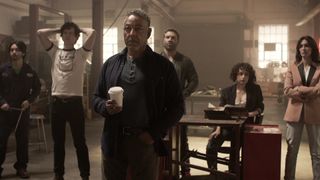 Netflix loves a good experiment – and the streaming giant’s next TV trial is unlike anything you’ll have seen before.

Titled Kaleidoscope, the forthcoming Netflix show is being billed as a crime anthology series – but with a compelling twist. The series, which launches on January 1, 2023, is presented in a nonlinear format, with viewers watching Kaleidoscope’s eight episodes in a different order to their families and friends. No one viewing experience will be the same, creating an air of mystery around the heist and leading to numerous watercooler-style discussions between you and your fellow Netflix subscribers.

In a press release, Netflix also revealed more about what audiences can expect from its choose-your-own-adventure-style TV show.

“Loosely inspired by the real-life story where seventy billion dollars in bonds went missing in downtown Manhattan during Hurricane Sandy, Kaleidoscope consists of eight episodes spanning from 24 years before the heist to 6 months after,” the press blast reads.

“Kaleidoscope is an all-new anthology series following a crew of masterful thieves and their attempt to crack a seemingly unbreakable vault for the biggest payday in history. Guarded by the world’s most powerful corporate security team, and with law enforcement on the case, every episode reveals a piece of an elaborate puzzle of corruption, greed, vengeance, scheming, loyalties and betrayals. How did the crew of thieves plan it? Who gets away with it? Who can be trusted?”

There are 7 billion ways to solve a crime.Get your first look at KALEIDOSCOPE, new heist series starring Giancarlo Esposito, Paz Vega and Tati Gabrielle. Only on Netflix on January 1. pic.twitter.com/8QIpR4suZCNovember 22, 2022

So, how will Kaleidoscope work? When you begin watching the series, you’ll start with a specific episode (randomly assigned to you by Netflix), each one of which is named after a particular color – hence the title Kaleidoscope. For example, Netflix might start you off with the entry called Yellow, which is set six weeks before the heist. Meanwhile, your best friend might kick off their adventure with the episode titled Red, which starts on the day of the heist itself.

Once that episode is complete, you’ll get another episode to watch, such as Violet (set 24 years before the heist) or Pink (six months post-heist). The only episode that every viewer will end on is White, which marks the epic conclusion to the story.

The idea is that every subscriber will get a unique viewing experience, with the order in which they watch Kaleidoscope’s episodes affecting how they view each crew member, when the plot is going, and which questions they’ll have (and answers they’ll get) after each installment. That way, Kaleidoscope will keep you guessing right up until its last moments and force you to rethink what you know about its puzzle pieces with each passing episode.

Analysis: Experimentation is the name of the game

Kaleidoscope isn’t the first big experiment Netflix has conducted when it comes to original content.

Netflix, which is still viewed as one of the world’s best streaming services despite enduring a difficult 2022, has had varying success with its two other major entertainment-based tests. The first – 2018’s Black Mirror: Bandersnatch – was a true choose-your-own-adventure affair, with viewers picking one of two options to move that movie’s narrative forward and earning one of five potential endings from their personal interactive experience.

The other – Fear Street, an adaptation of R.L. Stine’s fan favorite horror novel series – saw Netflix release its film trilogy adaptation across three consecutive weeks. That movie trio, which starred the likes of Stranger Things season 5‘s Sadie Sink and Maya Hawke, were shot back-to-back before launching weekly during the summer of 2021. Its release schedule allowed Netflix to boast that it was releasing the first real movie trilogy in an anthology format, even though that’s up for debate.

Kaleidoscope, then, represents another intriguing step into the unknown for Netflix. Sure, it’s taken creative risks before that haven’t paid off in a way many would’ve expected, but the streaming company isn’t afraid to keep trying. In an era where its competitors, such as Disney Plus and HBO Max, stick to tried and tested formulas like episodic TV releases, Netflix is at least trying to push the boat out and offer something new to its subscriber base. Maybe everyone else should take note.