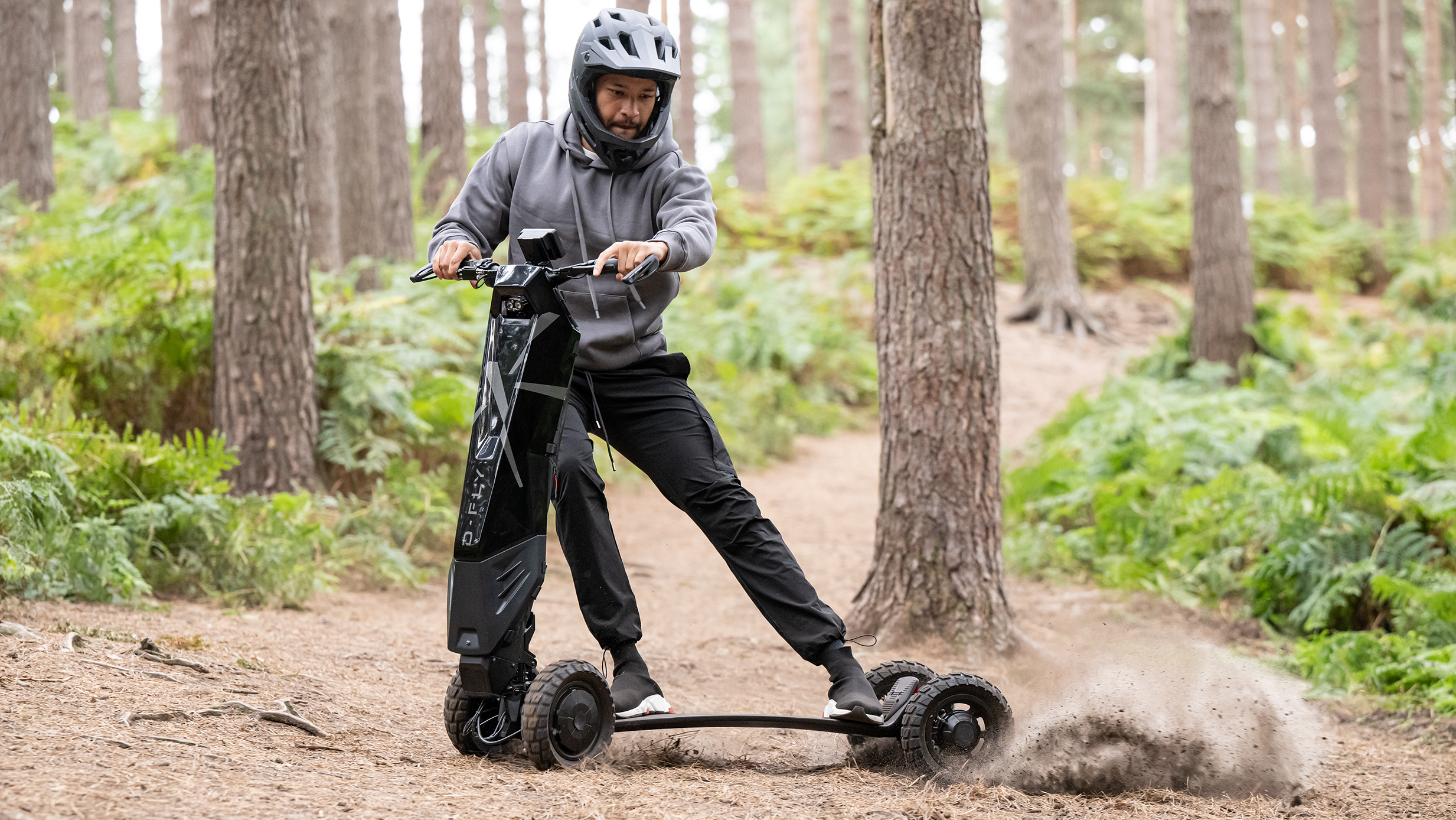 Yes, ladies and gentlemen – if you’re in the market for an all-terrain e-scooter to make onlookers mistake you for Batman on the way to work, then look no further than the Dragonfly.

Dubbed “the world’s first HyperScooter” by its creators, this strikingly-clad e-scooter claims to be the urban mobility equivalent of a supercar, offering riders a novel new way to travel about town. But is the Dragonfly likely to break into our ranking of the world’s best electric scooters? Let’s dig into its specs to find out.

The most eye-catching feature of the Dragonfly is, of course, its four-wheel design. Both iterations of the e-scooter – the urban DF and off-road DFX – come packing D-Fly’s patented three-dimensional full-tilt steering system, which engages all four wheels simultaneously to deliver improved stability and control.

Both models sport 10-inch tires, though the amount of tread offered by each differs slightly (you’ll get slick tires on the urban Dragonfly and rugged tires on the off-road version).

This four-wheel setup is supported by dual wishbone suspension (a first in the e-scooter market), fully adjustable hydraulic damped sprung suspension, adjustable deck suspension and full axle articulation – all of which sits under the Dragonfly’s wide-base carbon fiber platform. In other words, this thing will navigate tricky underfoot conditions – natural or otherwise – while keeping you as level as possible, should you wish to hit the dirt tracks after a hard day at the office.

Under its figurative hood, the Dragonfly packs two 550W motors capable of delivering up to 1,650W of power to all four wheels, which D-Fly says is enough to propel you towards a top speed of 25mph (40 km/h). For comparison, the top three picks in our current ranking of the best electric scooters (US) boast max speeds of 18.6mph, 20mph and 19mph, respectively – so the Dragonfly certainly has pace on its side.

Unfortunately, e-scooters can’t legally exceed 20mph in many US states (a figure that drops to an even lower 12.5mph in the UK), so the Dragonfly’s superior power credentials are likely to prove superfluous for most urban riders. Still, it’s nice to know that you’ll be able to reach max legal speeds with ease, or properly let loose if you go off-road.

More relevant, then, is the Dragonfly’s suite of on-board tech – which, quite frankly, sounds like it could rival some low-budget cars. Both scooter models come equipped with a 3.5-inch digital screen that shows the rider their speed, trip range, light status, battery performance and mode options, while other features like on-board ride sounds, spoken navigation and an electric horn are available through an attachable sound pod accessory.

You’ll also be able to lock the Dragonfly using a four-digit pin that disables the scooter’s electronic system until reentered – and given that we’re talking about the urban mobility equivalent of a supercar, per D-Fly’s description, this feature is likely to come in handy.

So, the Dragonfly is a speedy, super-versatile, high-tech e-scooter that’s built to weather all manner of outdoor environments – but how much does it cost? Well, that’s the bad news.

For comparison, our current top pick for US e-scooters, the Segway Ninebot Kickscooter Max, retails for $999.99 (although it’s currently on sale at Amazon (opens in new tab) for $899.99), while our equivalent pick in the UK, the second-generation Pure Air Pro, costs £599.00.

D-Fly may argue that, because the Dragonfly sports double the wheels, it should demand double the price, but it remains to be seen just how much of an improved riding experience this unique ‘HyperScooter’ design offers.